Let’s go back to where this started…

Let’s start this post where the story began for me. We’re going to reach back into the old stack of National Geographic magazines, looking for an issue back in July 2011. John Tomanio put together an infographic that rocked me to the core. 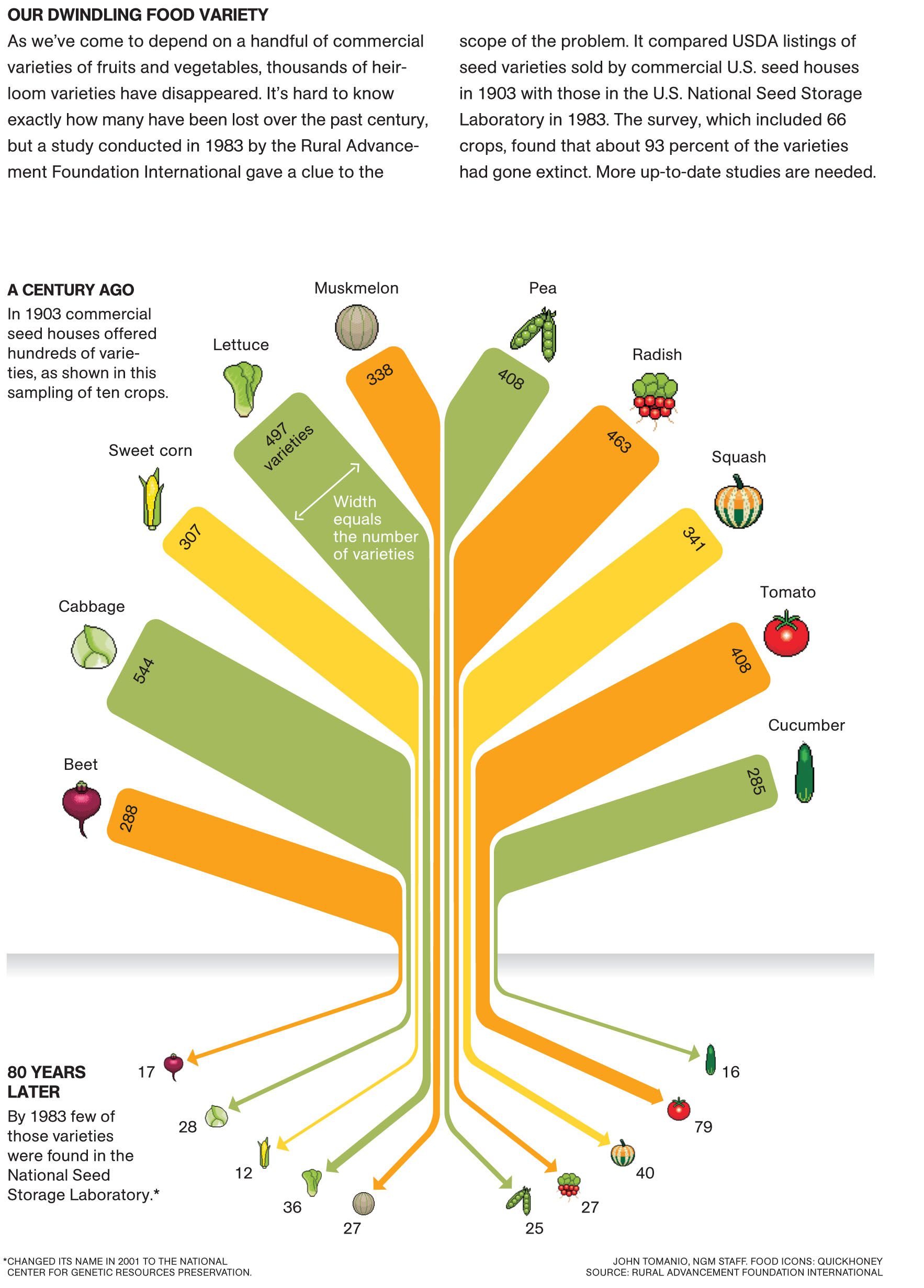 Why does that image matter so much?

Aside from the fact that I have a full-scale addiction to farmer’s markets and that it means that I am having 94% less fun than I should be having, that image means that:
Even the biggest gambler should have trouble with these odds. It’s too big a bet, and if we’re wrong, the cost will be paid in millions of people starving while we try to adjust our food production with very little variety remaining in our seedstock.

How did we get here?

Over the last ten thousand or so years of agriculture, seeds have been bred and shared openly between farmers, communities and governments. The people planting those seeds select many related varieties of the same plant each year, and kept seeds of varieties that they weren’t planting. Why? Each year, some did better than others, and even the best farmer couldn’t predict all possibilities that would impact they crop. Farmers had a close and personal relationship with their seeds, and deep experiential knowledge about how each variety performs under varying conditions.After World War Two, there was a major shift in thinking around farming. There was a transition from open-pollinated to hybrid seed. With the task of feeding a growing population, agricultural scientists bred crops for yield, nitrogen uptake efficiency, pesticide resistance and shelf life. Hybrid seed became increasingly productive and widely available. With hybrid seed, farmers could choose more productive varieties that required less labour. A decreased demand for labour facilitated urbanization throughout the 20th century, which also meant a general loss of knowledge of how to farm, as people moved out of rural areas. Access to hybrid seed as well as declining numbers of farmers also led to a loss of seed saving expertise, and since the green revolution 75% of agricultural biodiversity on earth has been lost. Reclaiming biodiversity is thus a critical goal of the food sovereignty movement.

If you think that these claims are exaggerations, I would like to point at The Great Famine of Ireland. Nearly a million people starved when their preferred foodstock (a single variety of potato) turned out to be vulnerable to blight. Since everyone had the same thing planted, there was no fallback position. It’s why the O section of the Boston phonebook is the longest section.

Around the world, seed diversity is threatened, and yet it is critical for ensuring a secure and resilient food system that serves both people and planet. At a time of climate crisis, there has never been greater urgency to protect and restore global seed diversity.
SeedChange is a Canadian organization that promotes food sovereignty. They espouse the seven pillars of food sovereignty. Farmers at the International Forum for Food Sovereignty in Nyéléni, Mali, in 2007 defined six pillars of food sovereignty. A seventh pillar was added by members of the Indigenous Circle during Food Secure Canada’s People’s Food Policy process.

Below are a selection of movies on this topic. They do a much better job than I do explaining how we got here, and what we need to change to protect our food supply.

[This is a brand-new movie, unlike the links that follow. Sorry, you’d have to buy it to watch it!]

Based on events from a 1998 lawsuit, Percy follows small-town farmer Percy Schmeiser, who challenges a major conglomerate when the company’s genetically modified (GMO) canola is discovered in the 70-year-old farmer’s crops. As he speaks out against the company’s business practices, he realizes he is representing thousands of other disenfranchised farmers around the world fighting the same battle. Suddenly, he becomes an unsuspecting folk hero in a desperate war to protect farmers’ rights and the world’s food supply against what they see as corporate greed.

Percy Schmeiser died on October 13th 2020, 4 days after the film’s theatrical release. He was 89 years old.

Seed: The Untold Story (2016) In the last century, 94% of our seed varieties have disappeared. A cadre of 10 agrichemical companies, including Syngenta, Bayer, and Monsanto, control over two-thirds of the global seed market, reaping unprecedented profits.Seed: The Untold Story follows passionate seed-keepers protecting our 12,000 year-old food legacy.
If you want to go deeper, please click here to download SEED: The Untold Story Educational Discussion Guide. It’s a 55-page PDF that is a great study guide if you want to explore these topics with your kids.
Seeds of Freedom (2012), narrated by Jeremy Irons, charts the story of seed from its roots at the heart of traditional, diversity rich farming systems across the world, to being transformed into a powerful commodity, used to monopolize the global food system. The film highlights the extent to which the industrial agricultural system, and genetically modified (GM) seeds in particular, has impacted on the enormous agro-biodiversity evolved by farmers and communities around the world, since the beginning of agriculture.

“The reality is that in spite of the unrelenting pressures they face, it is these farms who feed seventy percent of the world’s population. These traditional farming systems use less land, less water, and fewer resources. They grow healthy, nutritional food, and nurture greater crop diversity. They protect soils, water, and ecosystems, and they are proving more resilient in the face of climate change. It is these farming methods that can show us the way forward for real food security.”

Seeds of Sovereignty (2013) Africa is coping with a lost generation of farmers who have watched their soils perish, costs rocket, and communities suffer after the introduction of industrialised seed and farming methods. They are now resisting mounting corporate pressure in an attempt to revive traditional seed diversity to secure food sovereignty. The people who plant the seeds for household use evaluate their crops in very different ways than those evaluating cash crops.

Seeds of Justice – In The Hands of Farmers (2015), narrated by Jon Snow, is the third film in the trilogy. It follows Ethiopian plant geneticist Dr Melaku Worede’s inspirational work to re-valorise farmers’ knowledge and protect their position as guardians of seed diversity. Treading in Melaku’s footsteps from his youth to the present day through his pivotal experience of Ethiopia’s infamous famine, the film questions one of society’s most flawed assumptions: that scientists hold the answers to ending hunger, not farmers. Even within a single crop in Ethiopia, the level of genetic diversity is astounding.

Drought in Ethiopia 1983 to 1985 caused foreign aid to pour into the country, but efforts refused to recognize local conditions. They tried to eliminate teff, replacing it with corn, and the situation only got worse. Dr. Melaku Worede turned everyone’s assumptions about gene banks on their head, creating a distributed set of seed stores based in the community, for the use of the community. Their local knowledge was the key to selecting the right seed variety for their unique conditions, as microclimates could produce radically different growing conditions in as short a distance as 5 kilometres. While his indigenous seed work with farmers was seen as anti-science by some people, it was based on empirical evidence gathered by the people growing and eating those crops.

What can I do?